Word on the Street.

← View all posts Next post:Don’t let the grind of running your company keep your business from having a personality. → 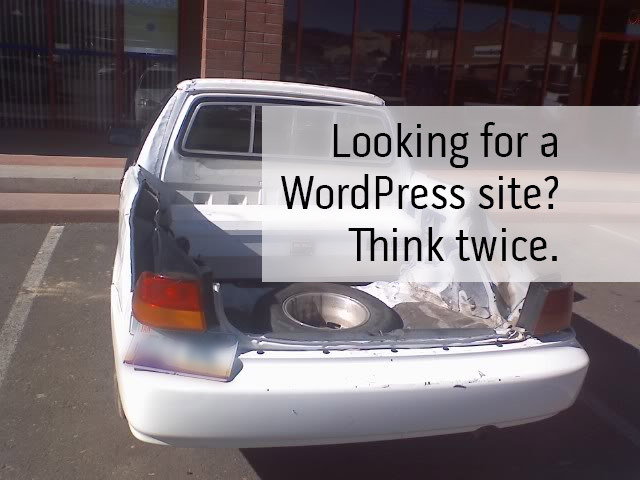 So we hear it all the time - "I need to have my site built in WordPress." The first thing we ask is, why. Some of the most common answers are:

Let's look into these answers a bit.

I heard it's the best.

This answer is my favorite. Not only is it an opinion, it's not even your opinion. Just because something is the most common or has the biggest name, doesn't necessarily mean it's the best solution for you. WordPress has been around forever, built in 2001 (that’s forever in the web world), however it was initially built as a blogging platform. And let me tell you, it is a fantastic blogging platform. But then people started using it to build limited, and rather awkward, websites. As they wanted more features for their website they had to create add-ons or “plug-ins” and sort of “Frankenstein” it into something closer to what they wanted.

I believe if you are building a site with the main priority being a blog, WordPress is the right CMS (content management system) for you. If your site doesn't have a blog or the main priority is a handful of other things, there are probably better options. Think of it this way: when you want to buy a truck, you don't drive away from the dealer with a brand new Honda Civic then hack the top off, remove the trunk lid, and take out the back seat, just because you heard it was the best vehicle.You'd just buy a truck.

It has awesome plug-ins.

As of writing this there are currently 34,607 plug-ins you can easily download into your WordPress site. While that number is extraordinary, 3rd Party plug-ins do have a drawback: updates. Each of these plug-ins was custom built for by someone to fit their purpose, and that purpose may not be the same as your purpose (remember WordPress is a blogging platform turned into whatever you need it to be). Let me give you an example:

You run a string of bakeries (yum) and you want a page with an interactive map. The coolest plug-in you find is one that only allows a single location and you have 3 (frown). So you pay a developer to customize that plug-in to include all your locations (woohoo). Now a few months later, WordPress has a security update which you happily install… but guess what, that darned update broke your sweet plug-in (gasp). Don't fear, the plug-in developer released an update that fixes everything! It fixed it so well, it even "fixed" your developer's customizations. Time to pay for the developer to customize your map again, I guess...

Moral of the story: those custom plug-ins are built for the current release. Keep in mind that WordPress updates are released every 1-2 months. There have been 15 releases so far this year, that could give you a headache.

I've used it before.

That's great! Was it on this site or a different one? Were there any plug-ins used? Was it professionally setup? Regardless of your answers to these questions, there still might be a learning curve. Every developer has a slightly different way of doing things. Think of it like handwriting or language accents. We are all writing or speaking English, but we do it in a slightly different way. The same is true to setting up your WordPress site. One developer might use a gallery plug-in to handle all your images, and one might use the posts section of WordPress to handle your product pages. Another might use a plug-in to setup your sidebar elements, while one is using post comments as a contact form. Simply put, whether you've used it before, or not, you're going to have to learn to use it the specific way your developer sets it up — kind of like learning to read a doctor's handwriting (or mine).

Not sure what to do?

That's okay, we know what to do. That's why you are going to contact us for help in the first place. The best thing you can do is have an open mind when it comes to your website. And that goes for everything, not just the CMS. After meeting with us, we'll let you know if you should go with WordPress, Squarespace, Shopify, MODx, Joomla, Drupal, ExpressionEngine, Dreamweaver Templates, or an... I think I started to ramble - you get the picture. Keep your options open!