Word on the Street.

← View all posts Next post:Social Media: Do you really need it? →

Commercials are not for bathroom breaks 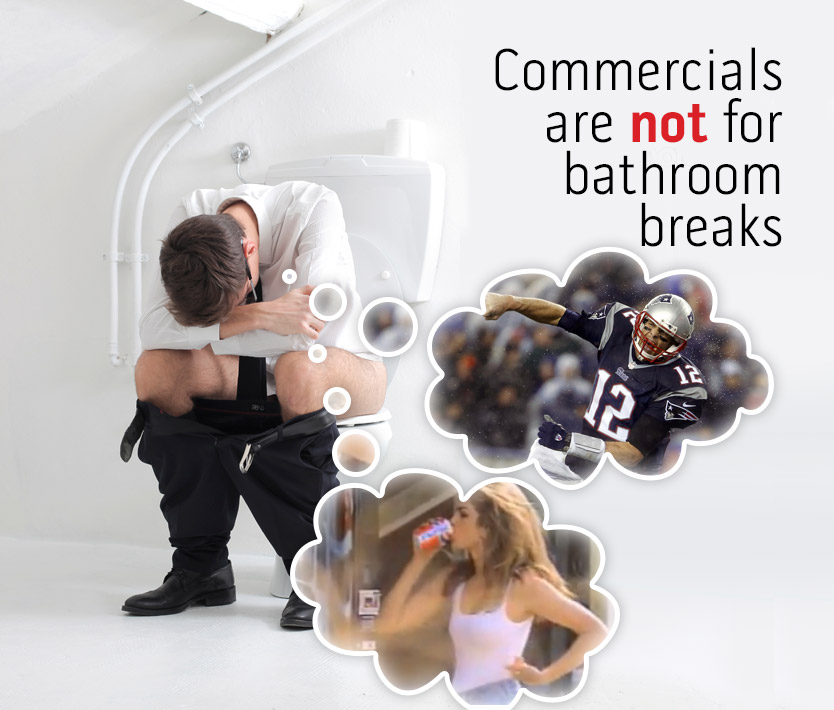 3 minutes remaining in the half, Seahawks ball at midfield. 3rd and 1. Shotgun, trips right. Jermaine Kearse in the slot, Russell Wilson calls for the snap. It's high. Wilson scoops it off the ground. Breaks a tackle, rolling left. Wilson fires deep to the left side of the endzone! Kearse has a step! HE DIVES! TOUCHDOWN! Replays ensue. Extra point good. Now for a commercial break.

It's not really a break though, if you get up you could miss the best ad of the day. You will feel left out at the water cooler when everyone's talking about the one where the guy did that thing that you missed. So the most important question of the day, when can I go to the bathroom.

Don't worry, I got you. Ready for it. As soon as you hear the ref say "the previous play is under review" get up and GO! You have at least 30 seconds to run to the bathroom and get back in time to hear "the call on the field is confirmed." If you are real desperate, go during kickoffs and hope nothing crazy happens, but you may only have 15 seconds at the most. If you really don't want to miss a thing, ask your Great Uncle Randy to bring you an extra pair of his Depend ® Underwear.

Now on a serious note, this year while you are watching the ads during the big game, pay attention to the companies behind the commercials. Most of them don't even sell what the commercial is focusing on. It's about brand recognition. Your ads don't need to say everything you do, they need to say just enough. If the consumer remembers the name of your business, it's a win.

Make sure you check out Avenue 25's top ten Super Bowl ads from the past.